Jacob Riis, Courtesy of the Library of Congress, Washington, D.C.

Riis originally hailed from Denmark, but emigrated to the United States in 1870 along with 125,000 other Scandinavians that year.

After leading an itinerant existence for many years, Jacob Riis began working as a journalist in New York. As a crime reporter, he witnessed the growth of the slums.

Riis used his camera as a weapon in an over twenty-five-year-long struggle to achieve concrete goals such as cleaning up the slums, building schools, improving social conditions, and reducing crime and injustice. He was one of the first photographers to use flash, something that enabled him to photograph interiors as well as night-time exteriors in the slum.

Until his death, he would use his photographs in lectures he delivered all across the United States. These photographs were also used to illustrate books such as How the Other Half Lives: Studies among the Tenements of New York (1890) and The Children of the Poor (1892). Between 1890 and 1924, as many as twenty-four million people emigrated to the United States via New York.

Take a look at some more of his photographs on Flickr 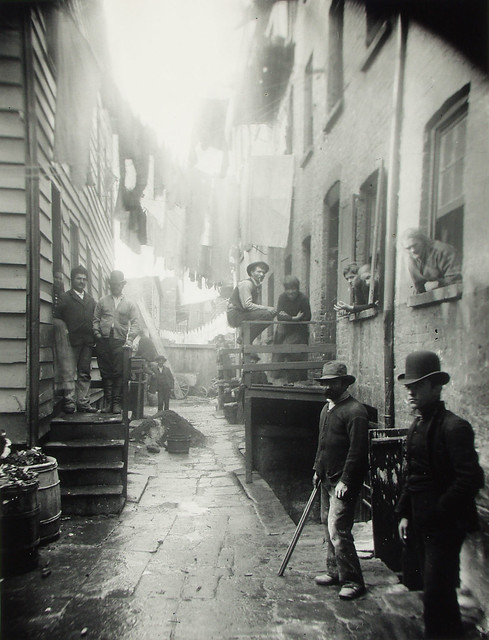 A goup of young men, New York. From the publication: Photographer and Citizen, Alland 1974. Silver Gelatin on Baryta, NMFF.003402