David Octavius Hill (1802 – 1870)
Hill attended Perth Academy, before beginning his apprenticeship with the painter Andrew Wilson in Edinburgh in 1822. Hill was one of the founders of the Royal Scottish Academy, and from its founding in 1829 and until 1869 he served as the organization’s secretary. He was also a member of the Edinburgh Calotype Club.

Composite photographs of Hill (left) and Adamson. Both circa 1845.

In 1843 Hill began working as a portrait artist when he was commissioned to paint a group portrait of the several hundred men who had left the established Church of Scotland in order to found the Free Church of Scotland the same year. In order to carry out this commission he sought the aid of the calotypist Robert Adamson. This marked the beginning of their longstanding collaboration, with Adamson taking photographs with artistic input from Hill. They worked together in Adamson’s studio Rock House in Edinburgh, and by 1847 they had made over 3,000 negatives of people, buildings, and landscapes.

When Adamson fell ill in 1847, Hill began painting again, and that same year he exhibited both paintings and photographs at the Royal Scottish Academy in Edinburgh. The following year he published a collection of portraits titled One Hundred Calotype Sketches. Hill won the prize for the best portrait by the Photographic Society of Scotland in 1862. Around this time he found a new partner, A. MacGlashon, and together they explored the collodion process. In 1866 Hill finally finished the painting Signing the Act of Separation 1843. In the painting we see Adamson with a camera.

Robert Adamson (1821–48)
Adamson was actually an engineer by training, but with the help of his brother Dr John Adamson, who worked as a professor of chemistry at the University of St Andrews, he began early on to explore the photographic technique. In 1843 Robert Adamson opened the very first calotype studio in Edinburgh. The location of such a studio was key, and Adamson’s Rock House enjoyed perfect conditions for lighting and shelter during outdoor photography. The same year he was hired by the painter David Octavius Hill, who had been commissioned to paint a group portrait of the 450 men who founded the Free Church of Scotland: Adamson took their photographs, while Hill was responsible for the work’s composition. This collaboration resulted in around 1,500 portraits in addition to other pictures from the immediate surroundings and of people from the fishing village Newhaven. They also collaborated on making stereoscopic photographs for Sir David Brewster.
The collaboration between Hill and Adamson lasted until 1847 when Adamson became sick and moved to his family in Burnside. The following year, the result of Hill and Adamson’s collaboration was published as One Hundred Calotype Sketches. The result of their work together was rediscovered in the 1870s, but Adamson’s name languished in obscurity for many years.

Take a look at some more photographs at Preus museums Flickr-page: 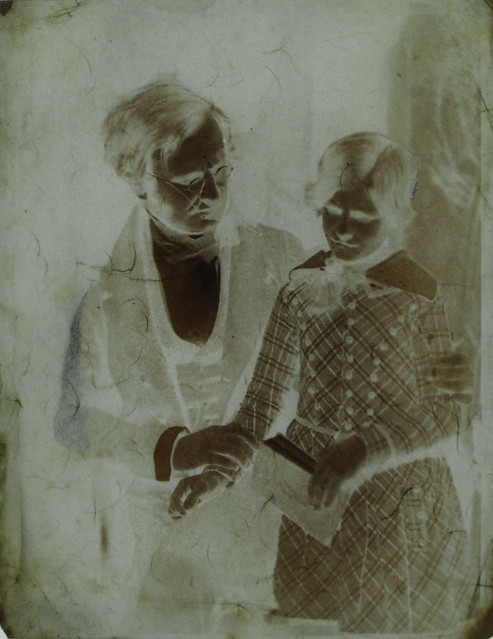